All Changed, changed utterly – how will the NHS emerge from its darkest hour? 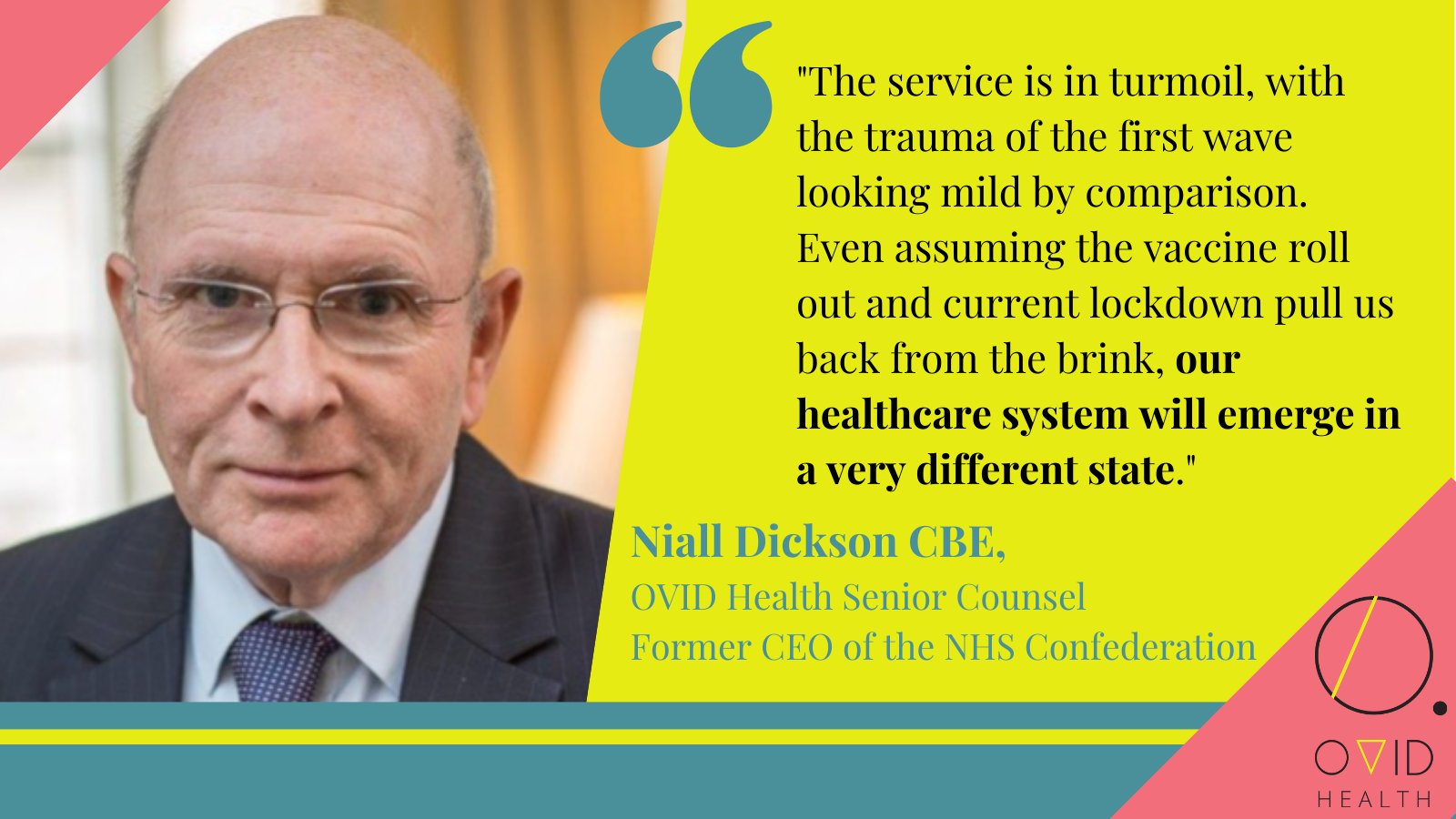 02 Feb All Changed, changed utterly – how will the NHS emerge from its darkest hour?

WB Yates’ aphorism ‘all changed, all changed utterly’ has been applied to the NHS before, but never has it been so apt. The service is in turmoil, with the trauma of the first wave looking mild by comparison.  Even assuming the vaccine roll out and current lockdown pull us back from the brink, our healthcare system will emerge in a very different state.

First, we face a staffing crisis like never before. Many senior managers have long argued that their greatest challenge was their inability to recruit and retain key professionals. Now the NHS must brace itself for a significant flight if not a mass exodus of staff suffering exhaustion, stress and other forms of mental distress and illness. There is a bright light on the horizon in the big rise in interest in health careers, but that cavalry with take a few and in some cases many years to arrive.

Second, there is the backlog. Great efforts were made after lockdown one to restart services, but they have stalled. More than 4.5 million patients are now waiting in England, with almost 200,000 waiting more than a year and it is going to get a lot worse.  In critical areas such as cancer, the human cost of thousands not being referred means more severe illness and death.

The precise effect of each of these factors is hard to estimate and the future in England at least will also depend on the approach taken by national NHS leaders and by the UK government. The former will be keen to push through major changes to GP and community services and to develop new integrated care systems as the engines of reform.  Ministers though will be under enormous pressure to concentrate resources and effort towards reducing the backlog and the waiting for hospital treatment.

The government has not only demanded action on vaccine roll out, it has also sought to make sure they are given some credit for it.

And behind the scenes there is bound to be a battle for who runs the NHS. Ask the service at local level and it will say that less and more intelligent control from the centre has to be the way forward. National NHS leaders will nod towards this but will want to keep their hands on the levers, especially where they believe performance is sub-optimal. And government, knowing it will be blamed, will surely want to reassert its authority, not least having had a taste for directing the NHS.

The government has not only demanded action on vaccine roll out, it has also sought to make sure they are given some credit for it. Ministers know in earlier responses to the pandemic they were depicted as the bad guys while the NHS were the heroes.

National NHS leaders on the other hand will want to keep media and public scrutiny on to Government. Their argument will be, ‘the politicians want more power, but we delivered despite not because of PPE, testing and track and trace failures and our staff were clapped……”.

And how will the public react – their awareness heightened by the pandemic? They may well expect new ‘first points of contact’ without overcrowded GP and outpatient waiting rooms, clinical visits cut to a minimum or at home and therapy sessions online. But if they are going to demand more, and faster, they may not tolerate a service struggling to meet demand.

There are of course also the things that never change. The service always needs reform, more money and more people. The least-worse option must surely be to create a new settlement, with realistic funding and expectations, and much clearer devolution of responsibilities and lines of accountability.